It was Ramadan a few years ago and I was just getting used to letting go of food for a while (I sort of held on to my foodie status for longer). On this particular day, I hadn’t eaten suhoor and was really looking forward to iftar. As is the usual trick my brain plays on me, I began eyeing a certain Chikki Noodles my mother had brought back from a get together she had attended a few days before. I started imagining things – What if I bought pepper and sliced it on the noodles, diced some onions, added some iru (locust beans) with a bit of crayfish and fried it altogether? What would it taste like? I had never heard of anyone cooking noodles with iru and wanted to try it. Boy was I in for something! I patiently wait for thirty minutes to iftar. While waiting, I had bought the ingredients I needed and set them in the kitchen. I figured my mother was going to cook the official iftar meal with the gas stove, so I targeted the Kerosene stove because I couldn’t wait till she finished before preparing my delicacy. Usually, our frying pan is always by the stove, it was the closest place to put it, when you’re carefully taking it off the fire in its hot state. Iftar came and I set my hands to work. It definitely smelled really good. The part I was most excited about was the frying. I fried the noodles that had been already garnished with my intended senrenren with the oil from the last time my mother fried – which had been sitting in the frying pan – and dished my meal after I was satisfied. It looked good on plate too, I almost took a picture. 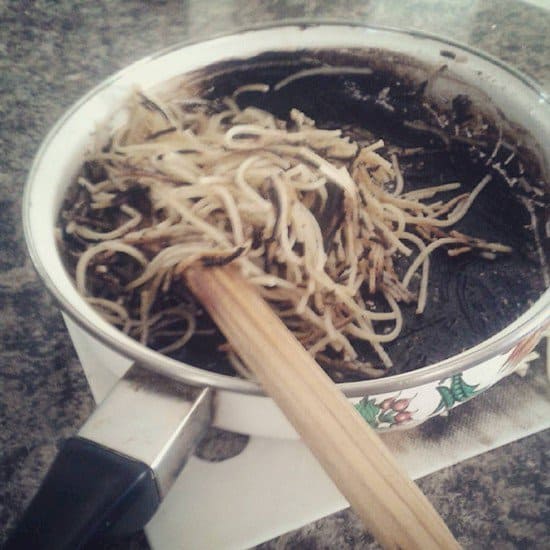 Immediately it was dished, it was time to eat. At first, it wasn’t shock that came over me, it was negligence. I was perceiving kerosene in my food! I told myself the smell didn’t come from the plate; after all it smelled really good while I was cooking, how could I not have known? Still I proceeded to take the first bite. Then the second. That was when I knew I was going to cry for my sweating and scheming. There really was kerosene in my food! I realized that while the frying pan lay there, there must have been a time where; during the process of refilling the stove with kerosene, some of it had gotten into the leftover oil I had used.

This was where the tears began. I couldn’t say anything to my mother, I was just crying. These days, I don’t even try to use leftover oil for anything. I pour it away, then wash the pan, smell the washed pan and use new oil. I actually prefer the used one, because I feel that unlike the new oil, its newness would’ve worn out and I will get the exact feel and flavor I need.

What’s your most memorable cooking disaster? Let’s talk in the comments.