A Nigerian software engineer, Celestine Omin of Andela was having his qualification scrutinized by the American Customs at the airport. Imagine ordinary Custom officer asking a whole software engineer, “Write a function to check if a Binary Search Tree is balanced.” Smh. When the bros kuku give dem the answer, Oga Custom tell am say na wrong answer. Lobatan!

Wait, did you guys hear that the court has removed 6 out of the 11 charges against IPOB leader, Nnamdi Kanu? Did you guys also hear that this came just a day after Soludo and Pat Utomi visited Nnamdi Kanu in Abuja? When court don strike out more than half of the charges against the bros, can we now say that his problems are half-solved? Or is this just another propaganda?

I no wan do again -Emeka Ike’s Wife cries out; Judge grants her wish

Guys, come close. I have gist. While you were hustling for your daily bread, Emeka Ike and his wife were busy in court getting a divorce from his wife. Suzanne had requested for the divorce since 2014 and 3 years later, the Lord has answered her prayers. We wish them well in their future relationships. 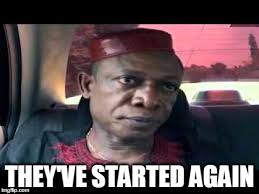 John Idumange, the radio station manager of Radio Bayelsa channeled his inner Jackie Chan in a flogging competition when he used kpankere to flog his staff mercilessly. When asked why he decided to design the backs of adults with koboko, he said he did it out of self defence.

Radio manager that cannot design back with koboko, is that one station manager?

Anyway, we are now hearing that they have shut the radio station down. One question though, will you allow your boss flog you even if your salary is over 200,000naira?