The dance floor is well within sight and I watch from my seat as people move in various styles and directions to the music the DJ is throwing down from his corner. Powerful strobe lights in various colors sporadically illuminate sweaty bobbing faces briefly giving them grotesque appearances, his included. It didn’t matter, as I’d seen how handsome he looks earlier in the evening to be convinced he is a good pick.

The target, ‘candidate Joe’ as I liked to call them is dressed in a red silk shirt with huge black heart-shaped buttons, black jeans and white sneakers. Cute is an understatement when describing him, with his moderate sized head, neatly shaped beards and broad shoulders. He stands well above six feet tall and ticks all the right boxes. That he dances very well too is an unplanned for bonus. Of course he’s alone, without a companion. I’ve been careful enough to make sure of his being alone, as that is the only way my plan will flawlessly move to completion.

Occasionally sipping from my robust glass of chilled chapman, I watch him from beneath my lashes until the DJ changes tracks, bringing on a ‘blues’ song. Dancers with companions quickly ‘fuse’ together, as if in sequence with some earlier planned choreography. He has none. The change in tempo is my cue.

In quick, calculated steps, I leave my table and walk up to him as he debates whether to leave the floor and find a seat or try his luck with one of the very few single ladies still on the dance floor.

“Do you mind if I claim this dance?” I breathe in his ear from behind, loud enough to be heard above the gentle music.

He whirls around, his face showing a mixture of surprise at my boldness and pleasure that he has at least found someone to dance with. I watch in silent amusement as he switches on the swag, drawing himself up to his full height. Men and their overly bloated egos, he probably thinks I’ve been mesmerized by his irresistible perfection.

And he bows from the waist.  I just smile.

At first he is hesitant, unsure of how best to handle me. By the middle of the second slow jam I’m all over him, letting him feel my alluring softness as I press my soft curves to his manly form. He soon gains confidence and grows bolder in his demeanor, just like I anticipated.

“What’s your name?” he murmurs as I bring both of my arms up to encircle his neck.  I perceive a faint whiff of alcohol on his breath, another boon for my cause.

He pauses and draws back a bit to look into my eyes, trying to see if I’m being sarcastic or drunk. I just continue smiling innocently. Then I wink, and he laughs.

“I like you too, although you didn’t tell me your name.”

“I’m pleased to make your acquaintance Edafe. Let me tell you a secret, I usually don’t do this, but ‘tis valentine so….”

I shrug and draw him down and closer, my full boobs pressing tight against his muscled chest and playfully nibble on his lips for a few seconds. Something warm pokes me from inside the confines of his trouser as he drags my waist to him and squeezes my bum in retaliation. I let him, swaying gently to the rhythm of the music as his palms wander all over the smoothness of my considerable buttocks.

“Another secret I should let you in on, I’m not wearing panties.”

His entire frame freezes. This time I laugh aloud.

“Don’t be scared, I don’t bite. You’ve never had a girl tell you that before?”

He starts moving again, laughing a little louder than before, but his hands stay in place, claiming ownership of my pliant posterior.

“Why would I be scared? Of course I’ve heard that from ladies before, too many times to count in fact.”

“That’s good then; it means you know what time it is. Maybe we should step outside for some air, I feel a little clammy down ‘there’. Must be the heat inside here.”

I let my fingertips lightly graze his zipper.

This time there is no hesitation. I can almost hear the shout of triumph bursting in his brain as he leads his ‘conquest’ out of the hall and into the night towards a secluded part of the garden on the other side of the compound. The anticipation of things to come quickens his steps, and we walk across in a hurry until we find space big enough for two behind some giant potted palms strategically positioned to keep out prying eyes. I look around to be sure no one was watching.

“Let’s see if you know how to play” I say with a coy smile when we got into position. “Close your eyes Edafe, It’s your lucky day and I have a surprise for you.”

So powerful is his thirst that he obeys without question, even placing his palms over his eyes to convince me that they’re well shuttered and he can’t see a thing.

The plastic syringe flies from its secure ankle holster to his neck in a flash. Before he even has time to react to the prick of the hypodermic needle, 85 mg of Suxamethonium chloride is running riot in his system, delivering instant paralysis.

He goes down like a stone, his head bouncing off one of the concrete pots.

Quickly looking around again to be sure nobody is observing us, I bring out the stiletto strapped to my inner thigh, remove it from the customized scabbard and stab him straight and true right in the heart, forcefully pushing in the razor sharp knife to the hilt. His grunt as the blade digs in could have been mistaken for the sound of sexual pleasure had anybody been listening that closely.

Then I remove the white plastic rose petal from my hair and briefly dip it in the rapidly expanding pool of blood around his torso to stain it red, before dropping it on his chest as he lay there drawing his last breath. 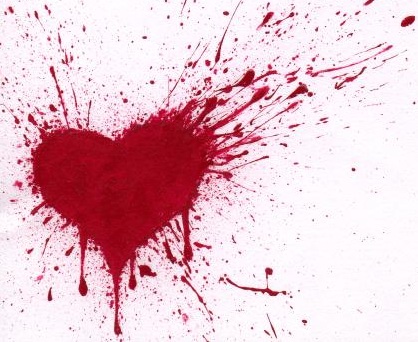 “Another one for you my angel, have a very happy valentine.”

I get out of the hotel in double quick time.

Much later as I lie in the bathtub, covered in suds and reveling in the fruity smell of exotic bath salts, I let the tears flow. Today makes it three years since my younger sister Angela died as a result of the horrific injuries she sustained during a brutal gang rape at a valentine night party in the University of Jos.

Nobody has ever being arrested for the crime, and although the police made a halfhearted attempt at investigating it, the case has probably been filed away as one of the thousands of unsolved murders that happen every year in Nigeria.

I refuse to let my darling sibling go just like that, so every valentine night I find a party, identify a guy with all the qualities I feel Angela would have liked, and stab one more male heart in her memory to ensure she never lacks excellent company in the great beyond.

It’s all a sister can do for love.